Today was a great day in many ways.  We made some different things that all were firsts for me.  But one other first is that tonight at midnight I am going to work/observe at a local bakery here in town. So this will be a quick post.  The owner of the bakery is one of Marda’s former students and is doing very well.  We made a Chocolate cream pie, that had two layers of chocolate filling (a darker one on the bottom and a lighter creamy one on top) and was covered with whipped cream and chocolate curls.  It is a “pie” because it has sloping sides.  It was in the freezer most of the day, so I only have one quick picture of it.  We did have a piece for lunch of the smaller one that we made.  Even the dog Nana was begging for bits from David. 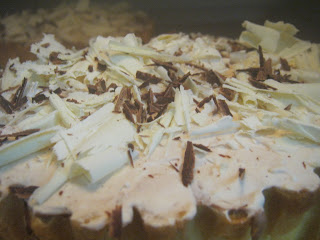 We then worked on making Biscotti with almonds and pecans.  This is a great recipe and takes several hours to accomplish and then you let them dry out until they are totally crisp.  Marda likes them a bit smaller than some, so that they are not so huge and they are delicious.  She made up the recipe after eating some biscotti in Italy for years and working to make them taste just like they do there.  She says that they are not so hard and are lighter in Italy.  They are baked in long loaves and then sliced when cool and baked again to dry them out.  Here they are getting ready for the second baking.  There are tons of nuts and a very crisp texture.  You don’t have to be a coffee drinker or a dipper of any kind to enjoy these. 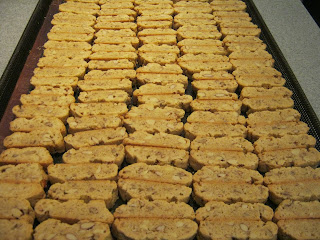 You can see the nuts in the Biscotti on their sides 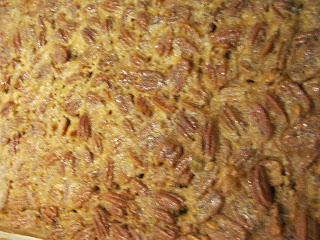 We also baked pecan pie squares on top of almond tart dough and they will be cut out  tomorrow. 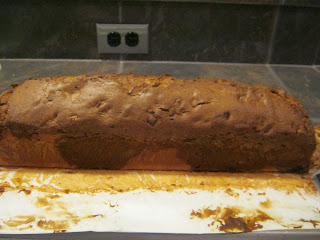 This is chocolate marble pound cake which has a deceiving exterior. 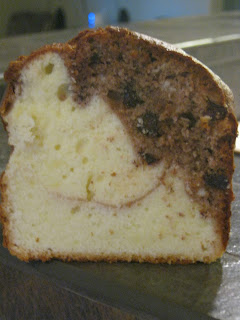 The inside when cut.
Fabulous aroma and chocolate chunks in it with orange peel in just the chocolate batter.
One of the most exciting things today was that while I was baking, I was also watching a bid item on ebay.  Every bakery who is planning on doing very much pastry work must have a sheeter, which is a motorized rolling pin that can go down to 1/64 of an inch.  This is very important because hand rolling is too unreliable for croissants and Danish pastries.  It also helps to get better results on all pastries because they do not heat up as much as when done by hand.  I had wondered about getting one to use at home to keep baking when I return and eventually move it into the bakery.  Well….I won the bid.  A little later after that, my teacher said ” If you own a sheeter, that makes you a real baker.”  Or else it makes you very zealous about your hobby…aka Baking Freak.
« Previous: “The Queen of Hearts made some tarts…”   Next: Midnight Madness »