How much Challah?….Or in other words, “How to make 30 loaves in one day….and start a business.” 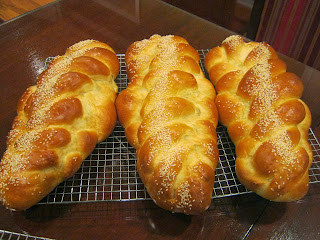 Well, there it is….Challah!  This is a European egg bread that is of traditional Jewish origin. I am getting ready to bake 20-30 loaves in one day in my home oven as  a sale to “dress up your Thanksgiving table” through my website: www.thebreaddoctor.com.  I took two loaves to the hospital one day and they were gone in less than two hours.  I will have to admit that I was pleased to hear people holler down the hall…”That bread is amazing…it is so light….now I am in trouble, etc”  I have to give all the credit to my teacher, and I still have much more refining to do.  But it was great to know that I could produce a product that was attractive and tasty.
This is the second formal sale (the first time on October 25, was just an informal foray into Facebook to see how many people would respond)  that I have done through the website.  The last one was November 8 and 9, “The November Roll-a-Thon,” where I baked Cinnamon Caramel rolls and Kaiser Rolls.  I sold over 30 dozen rolls in two days.  I thought of the idea because a friend needed to have those two kinds of rolls for a conference that she was hosting that weekend.  She asked if they could be my first formal customers.  I then began to test bake and to see how long it took me to make and bake them, etc.  I then decided to extend the baking to anyone who sent me an order through Facebook or on my website.  The orders began to come in, I began to bake and package, and I learned some very valuable lessons.  It is sort of difficult to bake two different kinds of rolls in a home oven when they require different temperatures and you can only bake three dozen at one time….hee…hee.  I also realized that the dough mixing and proofing was going well, except I had no way to keep it from rising too fast, and so I was making dough all day long both days and retarding (slowing) it in the refrigerator and performing all kinds of multi-tasking to get everything ready for the oven when it was ready.  It was busy.  Everyone seemed to be pleased with the product and I had gotten some bright ideas for the next time.
First, only one type of product until I get an oven that is bigger and can heat up faster and bake more at once.  (That is why people build bakeries!)  Second, I needed to choose products that can be held for some time and kept fresh so that I can bake starting early in the morning and still deliver at 4-5 pm.  Third, I also need to start with bread that is made from dough that can rest for a while so that I can make some of the dough the day before and then bake it off the day of the sale.   These were all great ideas to make the next time easier.  So….Challah bread it is.  The dough can rest for 24 hours before being made into braids and so I can get several batches into various stages of resting the day before and then braid and bake my brains out on November 20.  It will be great fun!

So, this is where it begins.  I realized when I got home from Bend that I could not rush downtown and just hop into a retail location.  I needed to keep practicing my baking, and in amounts that were bakery style…not just 1 or 2 loaves of something.  So, the germ hatched….why not start at home?  Maybe I will continue like this for a couple of years while I am getting things going.   Then, another germ hatched….Lisa and I were already planning a kitchen remodel.  Why not remodel the kitchen with features that will make it easier to run a home bakery?  Yes this is crazy, but true.

I had already done some research about Cottage Food Laws in the State of Wyoming.  I can run a baking business at home with some restrictions.  I cannot bake and sell anything that requires refrigeration to stay safe.  So that means no cheesecakes, eclairs, quiche, cream puffs, cream pies, or custards until I can produce them in a commercial kitchen.  I can make myself live with that.  So I am focusing on the myriad of baked goods that sit at room temperature (almost all of them) while I start my business.

So here is the beginning of the remodel, which started by the way, on November 8….the day that people were coming to pick up the first round of Cinnamon Caramel and Kaiser rolls.  Great timing! 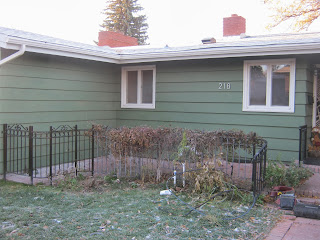 I will save the story about the water line that they dug into in this chasm for a later blog. Needless to say….there will be roadside service as people pick up their Challah on November 20.  The extra space in the kitchen will be nice and make things great for our family and children visiting home as well as the bakery venture.

« Previous: The Bread Doctor is in the house…Opening Weekend   Next: Challah bonanza »