First impressions can be tricky…as I have learned again in the last 24 hours.  I seem to be running into them right and left like the cat, Max, that suddenly appears under my feet,  Max is a roommate that I did not plan on.  He seems sweet at first, but when I was writing last night, suddenly I felt claws digging into my knee from the kitchen chair next to me. 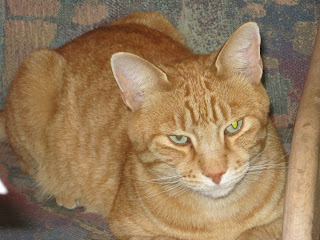 Needless to say, Max is not sleeping on my bed like he does the owner, Papa Nolan, as I have affectionately named him.  Nolan (19) and Lin (21) are my roommates and are nice guys.  Nolan’s father owns the home where we are living and Nolan is the landlord locally and I met him at the Burger King where he works when I arrived. His co-worker said…”Oh, you are the new roommate?” 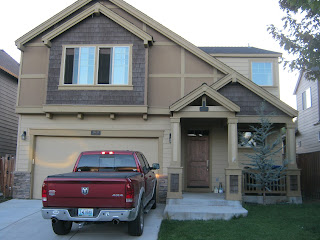 Lin is a local kid who moved out of the house to be independent and is working and going to school.  He had decided that since I was a guest, he should make me dinner last night….which was great.  Another unexpected first impression.  The boys are very easy going and accommodating.  I think that maybe I scare them a little and they just cannot get over the strangeness of the middle-aged doctor hanging out for a month going to baking school.

One last crazy string of impressions.  I drove by the school last night to make sure I could find it, and since it is in a home, there were no distinguishing marks and no signage.  It appeared to be just a residence.  I walked to the door to see whether I was in the right place and sure enough, inside, there was a sign….”International School of Baking.”  I thought that I would ring the bell and let my teacher know that I had arrived and if she was not there, it would be no big deal.  There was no answer, except from the miniature beagle, Nana.  I turned to go and got down the steps to the gate, when suddenly someone who looked like my teacher stepped out of the front door and queried me.  I said “Are you Marda, ….Hi, I’m Ezdan.”  “Who?” she replied.  I started to worry.  I also noticed that she was looking like I had interrupted a Sunday nap, and she said “Oh….you caught me at the worst time.”   As we were having this strange interchange from a distance of 20 feet, the dog escaped out the short gate that I had just opened to leave.  Marda became frantic, calling the dog and telling me to call her fiercely or she would not obey.  She then said that she would not come back and they would have to search for her in the car.  I ran down the street part way to find the creature.  Marda then reappears yelling out “chicken……chicken.”  I thought that this was a strange endearment for this animal, who was still not responding to me.  It turns out that “chicken” is an offer of the animal flesh of the same name that the dog recognizes, and the animal did go back to get a piece of pastrami that was the “chicken.”  I returned to the front walk and offered profuse apologies for bothering her on Sunday and noticed, after she pointed it out, that she was giving herself a “root” job and indeed had purple hair product on roots of her hair, which was sticking up at odd angles.  This gave the initial appearance of napping.  I thought, “Great, she now thinks that I am a stalker student, and she did not seem to remember who I was.”   She offered to have me come in, and there was no way that was happening.  All I could do at that point was try to run.  I hoped that when I went to class this morning, I could muster all of my acting prowess and pretend that it never happened.  I drove away with a strong sensation that I was in Las Vegas with a $12,000 chip on the Black 7 at the roulette wheel….and I hoped the marble was going to drop in my favor.

Well, the big morning arrived.  The day started off strange because I walked into class, and Marda noticed that I was wearing and identical chef’s coat to hers.  I mean exactly…buttons, black piping, 3/4 sleeve design….the same maker.  “Great….that really takes the cake,” I thought.  But, we sat down after the personal introductions and began to work, and the day was….fabulous!!  We made 6 large and 5 small challah braids, 3 dozen English Muffins (very good…had some at supper), and apricot glaze. 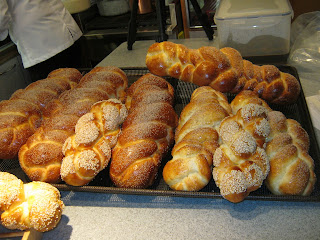 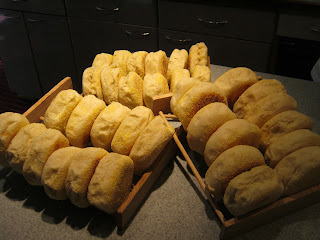 Marda had put together a huge course syllabus with all of the baking formulae that I will be making and even some that she thought that I would probably need in the future.  She has also compiled a large amount of written material that is essentially a baking textbook.  She has written everything she wish she knew when she was starting her bakery and compiled it.  I can now safely start to cash in my winnings because the class is going to be amazing, and I was lucky in Vegas.

One more amazing tidbit.  Whatever baked goods that I do not either freeze and take back to Wyoming, or take back to the house for me and the boys, Marda freezes and donates on the weekend to a community kitchen.  She is truly an amazing individual, and I am lucky to learn from her.
Tomorrow…..Focacia, Black bread….and more.

« Previous: In the beginning…   Next: My New Best Friend »