Croissants are the Queen

HAPPY BIRTHDAY TO GRACE AND MY MOTHER TODAY!!!!!

Well, if rye is “King” in a bakery the croissant is “Queen,” or so I’ve decided.  Today, I experienced the beginnings of the rigor that is necessary to produce a good croissant.  Tomorrow, I hope to be able to share with you the finished product.  However, I spent a good part of the day carrying a thermometer around to test the croissant dough and folds and make sure that they were the correct temperature to roll out.  You have a window of about 3 degrees 34-37 degrees F.  If it gets warmer…back in the freezer for chilling before any other rolling goes on.  It is a miracle to have a sheeter, and I am now dreaming of where I can hide one at home.  Marda has spent years developing this croissant technique that allows the final dough to be frozen for up to one week and baked off as needed.  She learned to make croissants in France.  I don’t think that you get any more at the source than that.

Today we assembled and baked the lemon bars, which went into the freezer tonight to harden off so that we can transfer them tomorrow.  They have an incredible crumble topping, and I have never tasted any so good.  I did get to eat pieces of the edges that we had to cut off to make them square.  The base is an almond tart dough. 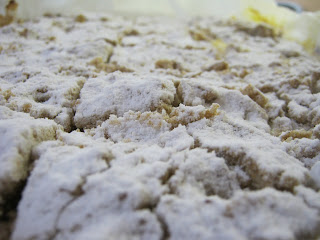 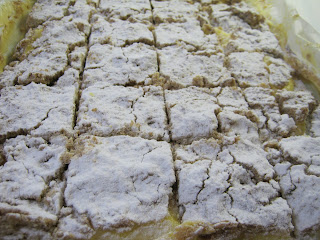 We also made Quiche Lorraine that I then got to bring home for dinner. I think her custard base is softer than I have been making, and it is sublime.  It did not hurt that we used a Gruyere cheddar cheese in it…yum.  They are made in individual paper molds, which is great, and if you are a real pastry buff you can look at the edge of the crust and see all the layers in the pastry we used.  I was very pleased with that. 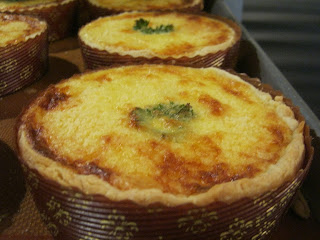 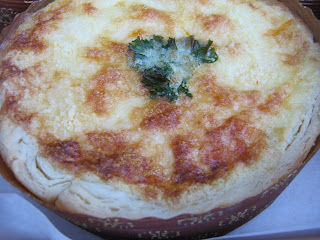 We also baked a “Seeds and Twigs” bread which is whole wheat with tons of seeds in it and on it.  It was not out of the oven yet, and Marda said she would tend it for the rest of the baking, but I did get a quick picture with it hanging out of the oven.  More on this tomorrow. 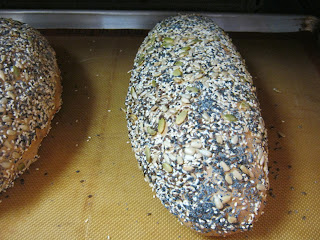 One of the big surprises today was the sourdough rye that we made yesterday.  I got to eat some on a sandwich at lunch today and it was truly a great rye bread.  It can be sliced very thin and hold its crumb just fine without falling apart.   Imagine pastrami and salami with mustard on rye.  It is made with sourdough so that adds quite a bit of moisture. Well, this is only interesting if you are a baking freak like I am, but it was as exciting as the Super Bowl for some folks.
And in closing….a bit of history.  Apparently the croissant was developed by Viennese pastry chefs to celebrate their country’s victory over the Turkish/Ottoman Empire.  Viennese bakers had their ovens below the ground and they discovered and attempt of the Turkish army to tunnel into the city.  The bakers became the heroes and were then celebrating this through food.  The crescent moon featured prominently on the invaders flag, so you could imagine that they were eating their enemies.  I am having a marvelous time and am grateful for this experience.  Marda is a great teacher and I am learning the baking and processes that I will need to run a bakery.  I am trying to soak it all in.  For the rest of the week, I am going to be a pastry chef.﻿
« Previous: Lessons Learned   Next: Croissants, anyone? »