I had a great time at church yesterday with the Sauter family and I came home and made dinner for the roommates and one of their friends.  There was mourning and rejoicing over the outcome of various football games as I prepared dinner.  They enjoyed the macaroni and cheese made from organic pasta, gruyere, and turkey kielbasa, that was more for me than them.  But we actually had a 10 minute sit-down meal together and I got a quick photo.  Here they are with their firefighter buddy. 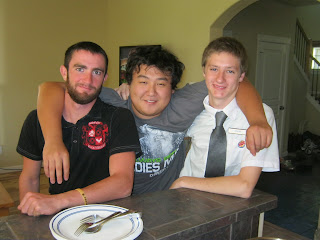 Left to Right…Trinton (firefighter), Lin (made me dinner on the first day) and Papa Nolan (his father owns the house we are living in).  They are very respectful and Lin came home from visiting his mother today and brought me 6 steamed dumplings.  Each had a different filling and his mother is going to open a food cart some day in Bend and sell them.  They were fabulous and he is always very respectful of me and a great kid.  I spend more time with him than anyone due to work hours.

I will have to say that I had a humorous reality check.  I spent the whole day agonizing over which type of morning pastries would be best in the bakery, cinnamon roll, crumb bun, or Pannetone. Maybe I would make more than one?….hmm.  We barely got the last batch of cinnamon crumb buns out of the oven and cleaned up after 9-10 hours at the bakery school and I raced home with thoughts trying that crumb bun for dinner, and you can imagine my surprise when I was greeted by evidence of my roommate’s shopping. 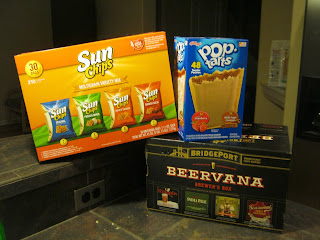 chips, beer and Pop-tarts (at least the chips are Sun-Chips)
Suddenly, I had to stop and laugh and realize that my bakery would need to cater to all tastes.  Including the chips, beer and Pop-tart people of the world.  I think that equals cinnamon roll.  We made 2 dozen today with an icing that stays set and doesn’t smear all over the place.  It has just a touch of orange in it and the dough is very soft…and not so sweet. I like it better than the overly sweet kind I have been making.  It tastes like it could go with something else.  Of course, the icing is sweet and has little vanilla bean seeds in it, but the bread and filling are not so overwhelming.  Here they are. 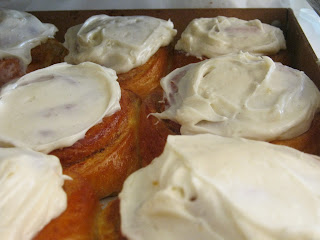 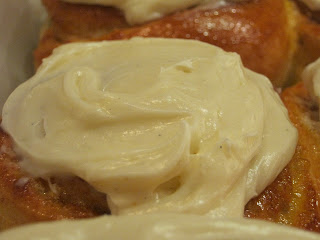 Then my teacher Marda also taught me about Brooklyn Crumb Buns.  They are incredible to make…you stretch the dough out until it is 1 mm thick and spread with butter and cinnamon sugar.  Then you make this massive roll, 50 ” long and cut up pieces that you then smash into a cinnamon crumb mixture and sprinkle it on the top, and smash the rolls again.  With all those layers and the smashing, you proof (raise) the rolls and they spring up with kind of a flaky interior.  I did finally have one for dinner and you will see them in the foreground in the picture below.  They are also not super sweet and the picture does not do them justice.  I think they are great and less meaty than a cinnamon roll….and you cover them with powdered sugar. 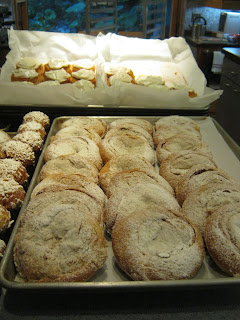 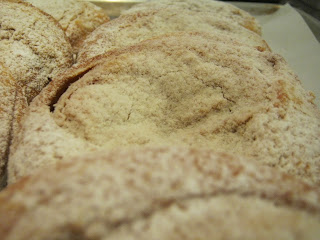 The last thing we baked today was Italian Panettone and this is a raised yeast bread with candied citrus and almonds and is baked in a paper mold.  It is used in Italy for breakfast or for dinner for dessert.  I actually candied some of the fruit last week and it went well….photos below.  I think that they turned out nicely and I will have one for breakfast in the morning.  They are also made in miniature size for individual portions. 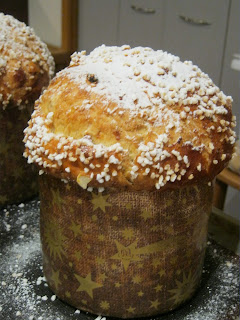 ﻿
I also made apple filling today and the sponge mixture for three more breads for tomorrow.  It was a great day.  I still cannot believe how much I am learning.  Peace, love, and baking.
﻿
« Previous: Poker, Pets, and Pain Perdu   Next: Lessons Learned »